Return to the cheap seats... 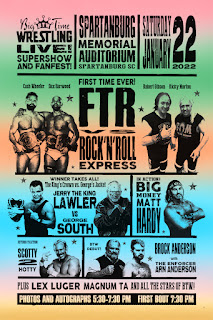 While I have attended 'rassling shows since my "retirement" I usually did not take a camera opting instead to just enjoy the show.
I've been getting the "itch" the last few months though, so I sent my
Nikon D80 to the shop and took it with me to watch Big Time Wrestling in Spartanburg. Got to see some old friends and sit in the upper level.
Lodi vs. Brock Anderson (w/ father, Arn). In Anderson fashion, Brock focused his attacks on one part of the body.

George South vs. Jerry "The King" Lawler. Two of my favorites. I don't care what anyone says, I enjoy watching George whip a crowd into a frenzy and he did it here.

FTR (Cash Wheeler & Dax Harwood) vs. Rock n' Roll Express. This and the South v. Lawler match made me feel like a 'rassling fan again.  R&R announced that this was the beginning of the farewell tour and at the end FTR paid homage to the veterans. 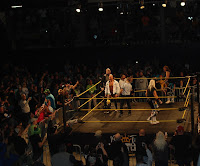 Posted by Blake Arledge at 11:51 AM No comments: